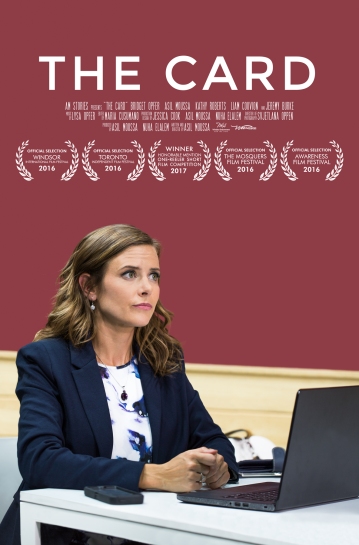 THE CARD is a short film about a businesswoman [Karen] who loses her credit card at a café just as she is about to secure an important transaction. In her frantic search to find the card, she acts impulsively.

THE CARD is a film about the struggle to stay present in today’s fast-paced society.

In the modern working world, THE CARD explores how our stresses may change the way we treat people, and in turn, change ourselves. THE CARD is a short drama about a businesswoman who loses her credit card at a café just as she is about to secure an important transaction. In her frantic search to find the card, she acts impulsively.

In a world that is collectively battling trust issues, THE CARD is a reminder to treat others with respect. This film feels like a brief slice of someone’s day, touching on the perils of modern-day living and missed opportunities. Each character and nuance in the story was crafted to fit the dynamic of situations that I have witnessed in my own life. Karen stemmed as a result of my fear: becoming an unhappy woman with work problems in a high-stakes job, family issues, and the world has hardened her. After a glimpse into what it might be like to be “Karen,” I wrote this script in response to my fears and overcoming them.

I am captivated by stories that focus on women and people of minority who are rarely seen on-screen. This film features realistic, complex women both in front of and behind the camera, as well as portrays a woman who wears a headscarf in an insightful way that does not draw attention to the headscarf itself, but rather on the actual character.

In wanting to show that there are two sides to every story, the film explores two narratives, causing the audience to be fully immersed as Karen, before showing them what she didn’t see. The aesthetics of the film emphasize the subtext. Cinematically, each part of the film visually speaks to the side of the story the audience is watching through camera positioning, intricate framing, and what is revealed in the background of each shot. The pacing and choreography make the events seem coincidental and effortless as these moments actually happen in real life.

I hope THE CARD inspires us to look inward and serves as a reminder to be kind to everyone.

Please visit THE CARD’s website for more information about the film: thecardshortfilm.com